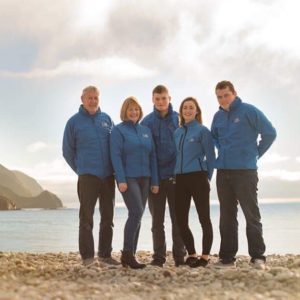 Kieran, Marjorie and Sean O’Malley began their family business, Achill Island Sea Salt, back in 2013, reviving the age old tradition of salt production on the island.

The inspiration to harvest sea salt came coincidentally from Kieran reading a book on local history which made reference to the remains of a salt factory in Polranny in 1831. Living right on the wild Atlantic seashore, the family began collecting sea water from the bays of Keel and Dooagh, and hand harvesting the sea salt in their kitchen using traditional methods.

Through hard work, determination and passion, they have created a sustainable and pure artisan product, which has now received critical acclaim from chefs and cooks alike from shores near and far!