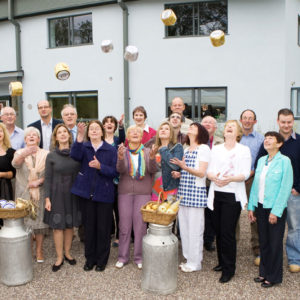 The story of Cashel Blue® and Beechmount farm goes back to the 19th century, but the modern story begins in 1938 when Samuel Grubb, buys Beechmount Farm from a childhood friend and begins to farm the land, a task carried on by his four children. When Samuel passes away, his son Louis returns to the farm in 1979 with his new wife, Jane, and the couple invest everything they have to buy a dairy herd of 90 cows.

The following year, Jane begins to experiment, making several varieties of cheese after attending a cheesemaking course! In 1984, the first Cashel Blue® is ready for the market. It is the very first Irish blue cheese and, initially, it elicits almost as much bewilderment as excitement in the country!